Chase turned 4 on a Wednesday this year. Eric had to work all day and night so I decided to take a half day and do what ever he wanted.  I gave him some choices and he picked the zoo. So we went to the Como zoo and boy was it nice on a Wed afternoon.  No one was there and we walked though the whole zoo in 45 mins.
The night before I asked Chase if he was excited about turning 4.  His response was "No I am sad and don't want to be 4.  I like being 3. 3 is my lucky number."  I tried to tell him all the fun stuff he will do at 4 but couldn't come up with much besides tball.  I think he has gotten over it now and is pressing on as a 4 year old.  You know one that has limited listening skills, eating abilities at times, and a small attitude at times.
Here are some pictures from our afternoon at the zoo.
The gorilla and her baby.  They are building these guys a new area at the park. 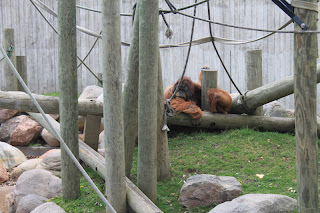 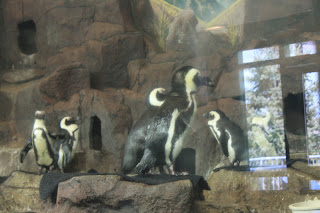 A brown bear and black bear on loan from the Bismark zoo due to flooding there.
I could have watched these guys play all day.  They were wrestling in the water and on the rocks. 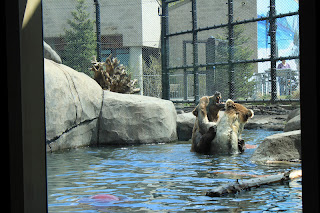 Always a favorite the lions.  They were inside that day so we got a good look at them.  Man- are they some big cats! 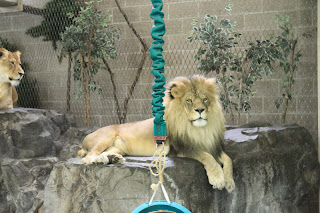 I believe the one on the right is a baby. 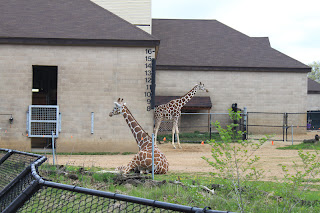 Shot of Chase and the zebra 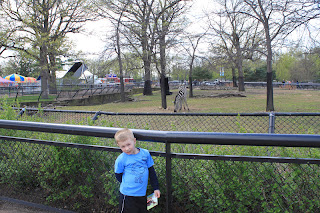 These were some poisonous spotted frogs.  Very neat colors. 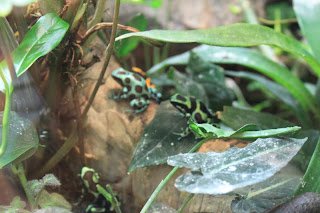 Chase even let me go though the flower part since we had went though the zoo so quickly. 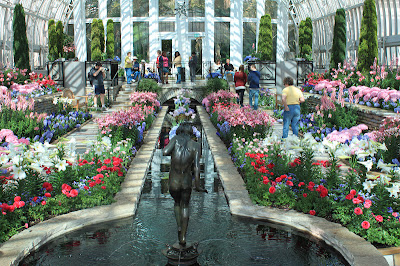 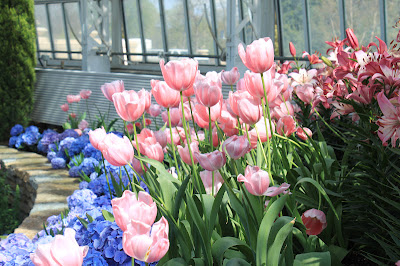 Chase is big time into collecting bugs so he got loaded with bug gear.  Below are some shots of opening his birthday gifts from Dad, Mom, and Brayden.  We now have so many bug jars and tools to view and pick them up that we could start our own exhibit.  He is out there everyday looking for new bugs and always wants me to help. This is really not my cup of tea but I put the gloves on and dig with him. 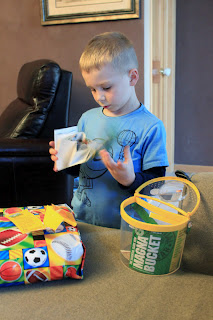 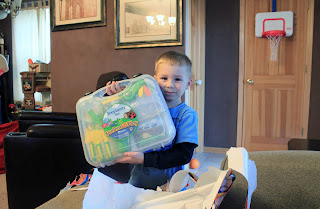 I decided to just pick him up a monster cookie vs getting another cake or cupcakes. He enjoyed it very much. 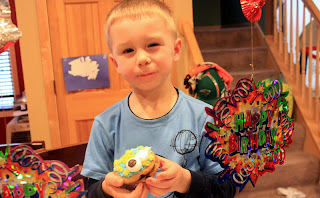 Brayden and I got carrot cake cupcakes.  Who knew Brayden loved carrot cake so much. He had that little cup cake mashed in his mouth in no time. 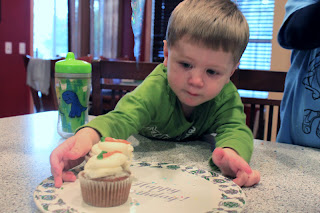 Posted by Jenny & Eric Bjorgaard at 2:45 PM No comments:

We held Chase's 4th party at Tuttle's Bowling Alley in Hopkins.  Chase enjoys to bowl and they have an arcade so figured it was the perfect spot. Below are some pictures I took from the party. 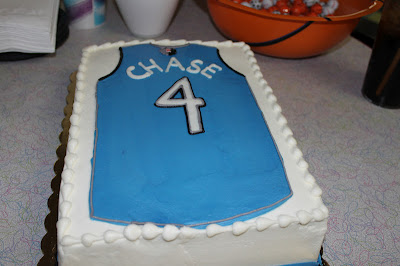 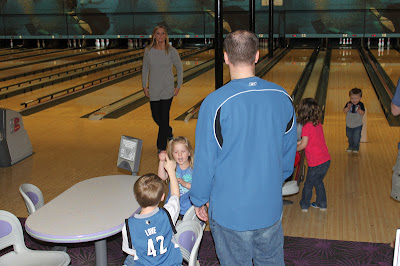 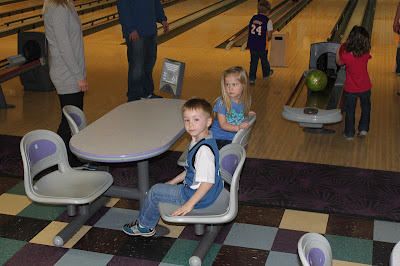 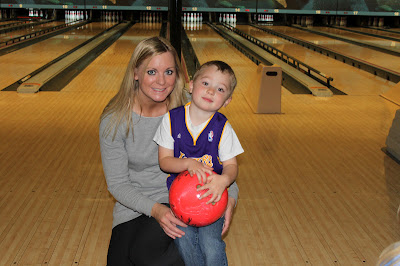 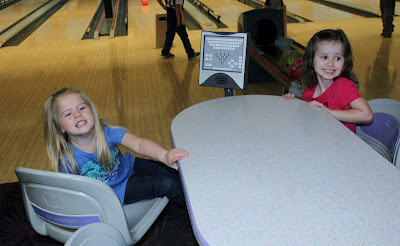 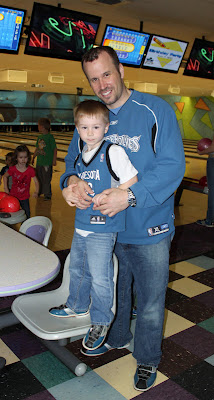 Chase hit it big on a game!! 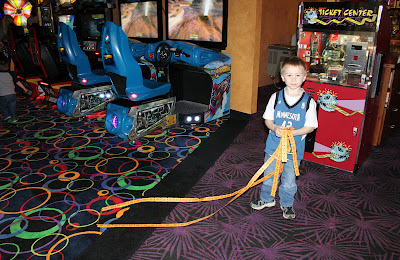 This is what Brayden did most of the time.  Skee Ball! 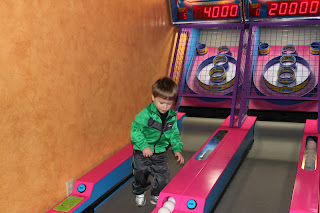 I forgot to get a picture of just him and the cake.  Eric said something after I started to cut the cake.  So this was the closest thing I got. 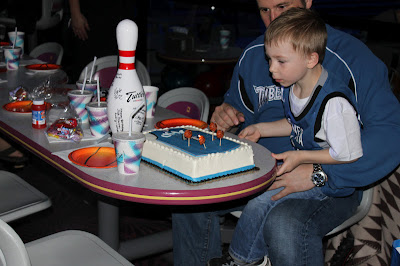 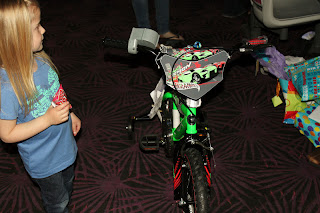 Ant Farm-We got the ants and they are making tunnels. 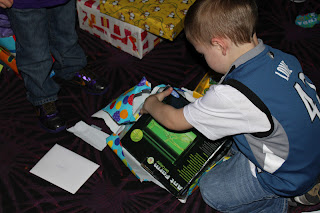 Butterfly Home-Haven't got the caterpillars yet should be kind of cool to watch the things turn to a butterflies. 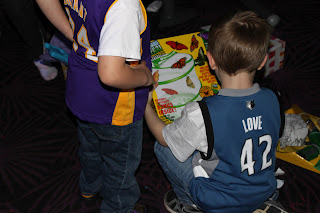 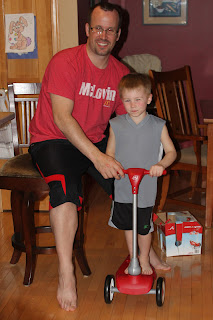 Once again an attempted at a family shot. 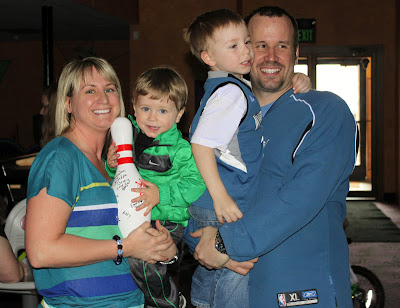 This was Chase come mid-afternoon that day.  As you can see Brayden was messing around with him and he had no idea. He was exhausted!! 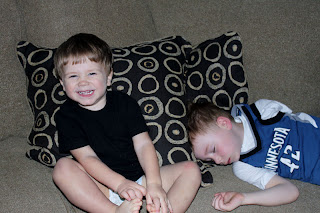 Posted by Jenny & Eric Bjorgaard at 3:31 PM No comments: