On Friday the 13th Brayden turned 3 months. He's getting to be such a big boy. He figured out last week that he has a voice. So he's been cooing and screaming away in delight. Chase says "Hey he's talking". He still loves to smile at you and his personality seems really laid back. His favorite thing to do is chew on his hands. He's holding his head up nice and steady and even stands really well when you hold him up. He enjoys napping (that's my boy!) and loves to be outside and stare at different objects. He mostly only gets up once during the night to eat so that has been really great since my return to work. Though not sure Eric's happy about it because now he has to get up every other night with him.


He doesn't have a check up this month that comes again at 4mths with a bunch more shots :( I also took him to Sears to have his 3mth photo shoot. I should get those pics back this week. Of course I wasn't totally happy with them but I'm I ever?


Here is the big 3 month old chilling in his seat. 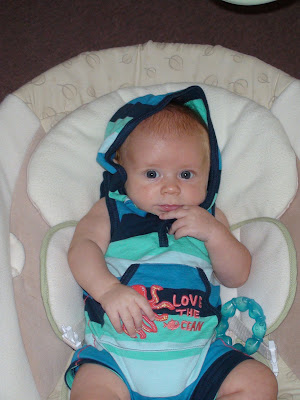 Standing by the couch. 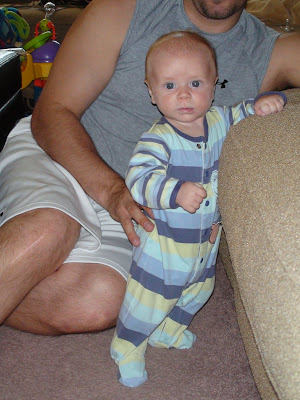 Here is a small video of the little guy talking to Russ.