Chase has really been enjoying playing baseball this summer and he's getting pretty good. As he says he hits lots of "home runs" and he "rips it" quiet a bit. We let him play in the house with a soft ball but that is becoming a little dangerous. Lucky for us the park a couple blocks away has a baseball field that is rarely used by anyone. Since being back to work I try and make a point of taking him there on Sat mornings. Russ has been taking him there on the days it doesn't rain. Brayden mostly takes a cat nap in the shade. Chase burns off a ton of energy running the bases (or running after the ball every time he hits it-doesn't fully understand the whole game yet).
Every once in a while he'll even let us hit the ball. The other day the Park and Rec guy at the park couldn't believe he was only 2 because he was hitting the ball so hard. Majors here we come!!
Since this was daddy's favorite sport he's enjoying teaching him the game. Maybe Brayden will be a volleyball man?
Here is some video of Russ and him playing in he back yard. Sorry so shaky I was holding Brayden in the other hand.

Also here is some video of him singing "Take me out to the ball game".

Here is a pic of his new Twins hat Uncle Russ brought him. 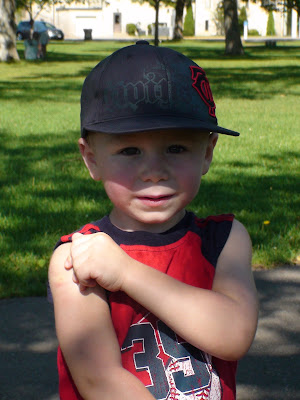 The one Grandpa got him was getting to small (Bjorgaard heads).
Posted by Jenny & Eric Bjorgaard at 9:56 AM