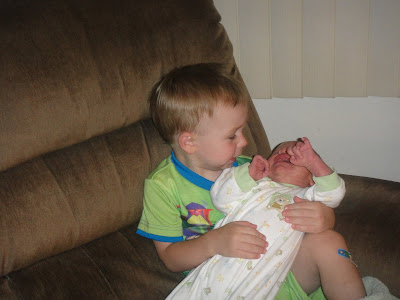 This wasn't a great shot of the boys but it's a first. Chase likes Brayden but never
asks to pick up him until he seen other kids holding Brayden. This was his 1st attempt. 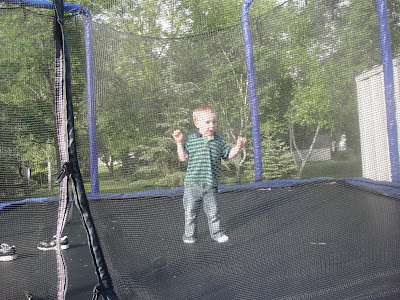 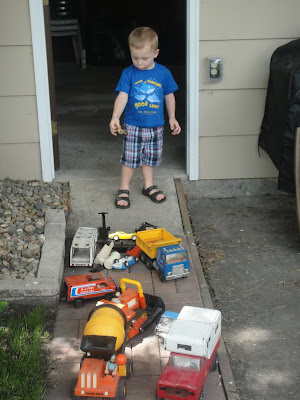 Chase found my cousins old school trucks to play with 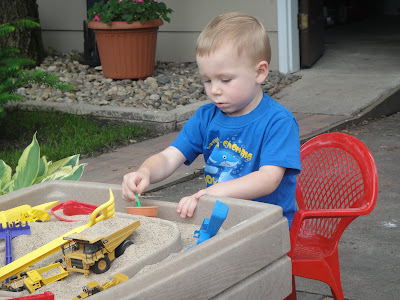 Chase enjoying the sand box. I bought one of these when I got home in hopes to entertain
him in our back yard. 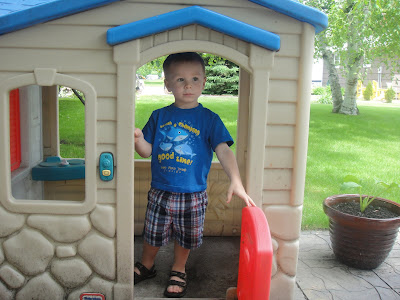 
After our weekend in Walker I planned to take my first alone trip with both boys to TRF. The trip was a little over 2 hours and we made it without any problems. Eric and Russ headed back to the cities and what I told Eric was part of his Father's day gift. No kids or wife for 4 days!!!
Once there Grandma and Grandpa had a couple days off as did auntie Lindsay. We spent most of the time just visiting at home and getting the boys all together. (I didn't take a lot of pictures from this part of the trip).
On Monday we hit up the new Mexican restaurant in TRF. I gave it a B+. Pretty good food and the place was nice inside. It was a quicker lunch trip since Chase was with us and you can only entertain him for so long. After lunch we went to the Lundgren's so Chase could enjoy their back yard fun. It was a nice day but we encountered the Minnesota state bird up there in full force. The Mosquito!!
On Tuesday I woke up not feeling the best. I ended up having a rough morning took some medicine and than a nap. I woke up feeling good and just in time to head over to the Alby's so all my friends could meet Brayden. We had a nice dinner and everyone got to see the little peanut. Chase enjoyed jumping on their trampoline.
On Wednesday some of my aunts came over for lunch and got to meet Brayden. Bridger was also over and once again Chase was scared of his cousin. They would play well for a while and than all heck would break loose. We tried to play outside but even in the sun the bugs were bad. I didn't get a picture of it but Chase had over 20 bites. He thought they were pretty cool because he got to put on Toy Story band aids on the bites.
We got up early Thursday morning to get ready to hit the road for our 5 hr trip. Chase managed to get Grandpa sick also so he had stayed home that day. And thankfully he did!! He entertained the boys well I finished packing the car up. I was able to leave early and drove though Wadena at 1:30 that day. Missing the tornadoes by a couple hours. I'm thankful for my dad that morning and for the fact that I had volleyball at 7:15 that night in Eagan to get back to.

All in all a good 1st trip with the boys. We got back to the cities in 6 hours not bad at all. Brayden slept almost the whole way and Chase watched movies most of the time. I was so worried about traveling that far with them but the little guys proved to be great for their mom!!
Posted by Jenny & Eric Bjorgaard at 11:22 PM