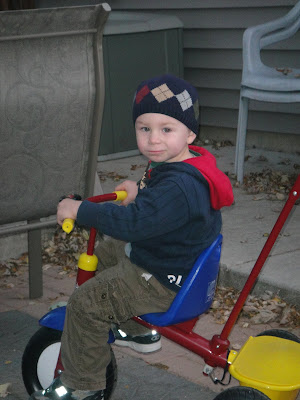 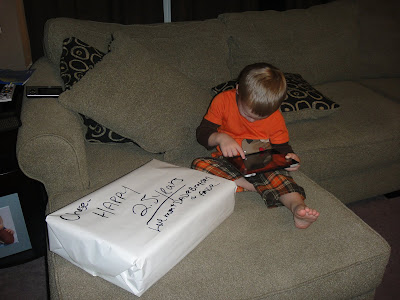 Chase more interested in Connect Four on the I-pad than in his gift. 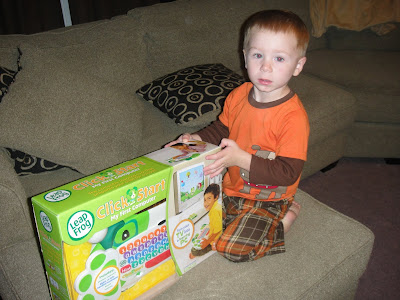 Chase with the new Leap Frog computer game I got him.
Which after he played it told me the new game is boring. I guess he knows all of the stuff on the game that came with it. I'll have to find him something more challenging but it said 3-6 year old.

Chase turned 2 1/2 on Oct 18th. I can't believe come spring he will be 3 already. He's doing great and really starting to understand so much more about life. Like he gets it that I get frustrated with him when he won't eat (he'll tell Eric at bed time "mommy is mad at me because I only took 2 bites"). He knows his ABC's very well, his colors, shapes, numbers, and is starting to read books back to us now. They are the ones we have read him a hundred times so he's doing to from memory. But it's a nice change.
He still loves to play the WII and I'm amazed how quickly he catches on to the games. Some more than others but he has no problem navigating though the menus and playing on his own. He also is a wiz at the I-pad. We have downloaded games for him to play and he loves to do that. He also likes to watch movies and check the weather on it.
He still isn't potty trained. Not great progress there. He has good days and bad days. We are all still waiting for the day he says "I have to go potty!" We keep telling him no more diapers = more money for toys. We might have to try a weekend potty boot camp soon.

He has his moments but all in all a great kid. I'm hoping the next 6 months are free of the terrible 2's.
Some quotes from Chase:
We get a lot of "let me think about that". (as he touches his face).
When I asked what he was doing down stair he says "Watching Uncle Russ, he's busy working on his new game." (meaning playing a new video game). "
"I want to go with daddy to work, let me get my tie."
"I need to sleep in your bed tonight." Who told you that Chase? "Woody and Buzz"
"Mommy that dinner smells delicious" And than when you get it on his plate that's icky.
Chase mid year stats: weight= 36.5 lbs & height=38inches
Posted by Jenny & Eric Bjorgaard at 10:46 PM