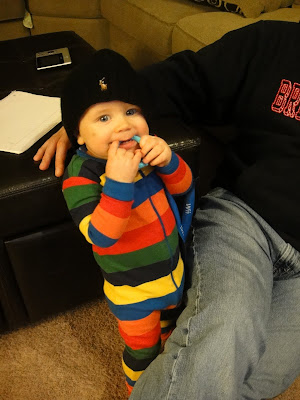 This is what happens when you put the oatmeal bowl down and let the dog outside. 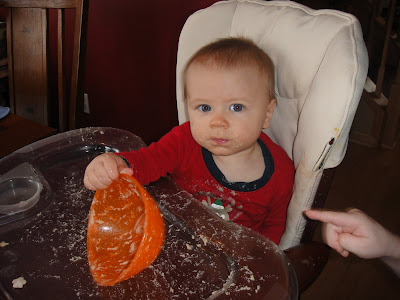 I figured I better post a 8 month update before he turns 9 months in Feb. The household was hit with the flu for a week. Than Fonzie got sick and spent a night at the vet. He's home and on the mend. So other than all that fun stuff we are just living life around here.
I didn't get a weight on Brayden this month or a height measurement. Next month he will have another check up so we will get all that good stuff. But what a difference a month makes. He's now crawling on all fours and boy can he get around. Eric called him a boomerang you put him down in one spot walk away from him and within seconds he's back at your feet. He's standing up on everything and walking around things by holding on. He stands by himself for a couple secs but hasn't really took any steps. He can crawl up the stairs this brought the return of the gates in our household. He's starting to use his voice more and is babbling up a storm.
He still eats really well and spits up lots. He isn't sleeping though the night. (I'm pretty sure Chase was sleeping though the nights by now.) But he takes a bottle and goes right back to sleep. And he is holding his own bottle now so that is nice. He has the 2 bottom teeth but think he's working on others.
He also still loves to giggle at things Chase does. Chase on the other hand isn't as friendly to him and is in total brat mode with him. I hope soon Chase gets that they can be good friends. I have a feeling on Brayden's next update he will be walking. If he can get pass all the bumps and bruises. He has some crabby days but all in all is still a great baby and is getting to big to fast!!

Sorry don't know how to turn the other way.