Look at Brayden's poor face. Chase on the other hand must have been between fevers here. 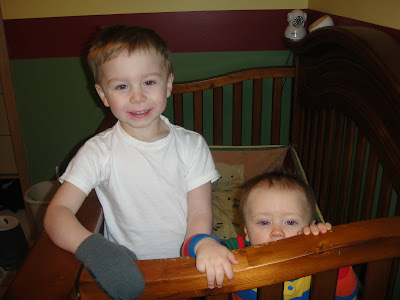 We took a trip up north the other weekend for a basketball tournament and so far the boys ended up with much more. It started on Thursday early morning with Brayden getting congested. That night turned into a fever and horrible eye goop and than a bad cough and more fevers. I took him in on Friday to urgent care. They said he had the start of pneumonia. So we started him on medicine. While I was at Urgent Care with Brayden I got a texted from Russ that said Chase had a temp of 102. We spent the weekend with both of them having fevers, coughs, bad stomach pains, and sleep less nights. Lots of fun let me tell you!! Really test marriages!

On Sunday Chase was still having fevers so I made Eric take him to Urgent care. A couple hours later they came back with antibiotics for Chase too. A call from the doctor today confirmed Chase has strep throat.

I stayed home with them on Monday because they both had fevers again over night. Let me tell you once the fevers have lifted there is a big difference. Chase is all over the place again and Brayden is all smiles again. Back to work for me and I cross my fingers I don't end up sick too.
The funniest part of the weekend came one night at like 3am. Eric decided to give Brayden a steam shower. So Chase and I sat up and talked (of course Chase was sleeping in our bed the whole time he was sick). We talked about going to the doctor and how Brayden sounded bad and should go back there. Than he some how got on the subject of going treat or treating. He said mom can we go out treat or treating again tomorrow night and get lots of candy. I told him that was a ways away but I would be happy to bring him. I asked him if he still wanted to be Charlie Brown? He said yeah and you can be Lucy. At this point Eric was in the conversation and said if you are Charlie Brown all you are going to get is rocks. (If you haven't seen Charlie Brown Halloween special this is where the rocks come from) Chase said no dad I'll get candy. Eric told him again if you are CB all you are going to get are rocks. Chase said so darn serious "Dad that is only in the Movies." We both just busted out laughing. Which we needed badly at 4am after a really long couple nights.
Posted by Jenny & Eric Bjorgaard at 11:07 PM