Eric was able to score a bunch of free tickets to the Twins game on Sunday. The seats weren't all in the same sections but the Drury/Bjorgaard's along with the Rislov's were able to all get a seat and enjoy a great day at the ball park.  It was crazy how some of our seats were in the sun so some of us were hot and sun burnt.  The other seats in the same sections just rows up had jackets on and freezing.  But it's still great to see baseball played outside where it belongs. 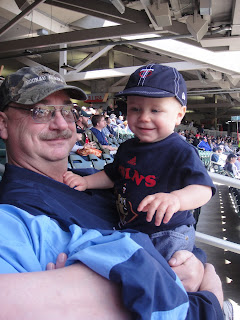 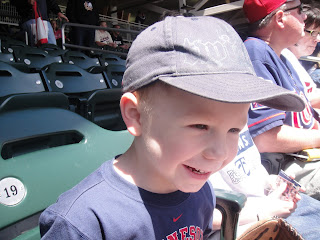 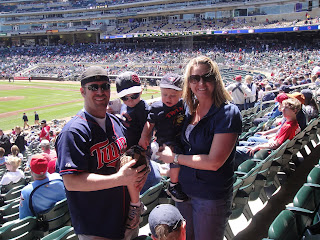 An attempt at a Family shot 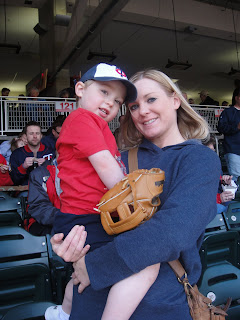 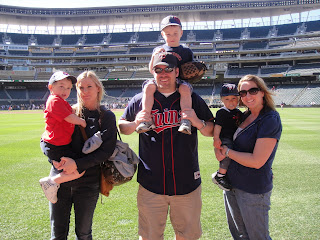 On the field where the big boys play. 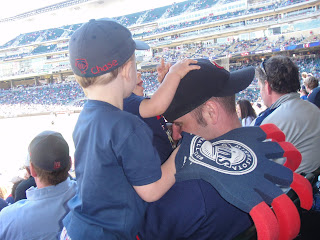 Eric enjoying the game.
The boys enjoyed the game as well.  Chase enjoyed a hot dog and a bag of cotton candy almost has tall as he is.  Brayden was great at the game for as busy as he is. He had lots of smiles for the people around us.  He enjoyed clapping but was a little behind the rest of the fans.  Bridger found a bat at the gift shop and also found time to take a nap.  We hung around for the whole game even though they lost (big time).  On Sunday's they let the kids run the bases after the game.  We decided we better get in line to do that.  It was cool to be on the field where the big boys play.  The boys enjoyed it but I think us adults enjoyed watching them run the bases more.