The boys and I spent 9 days on the road this month. Our first stop was back to TRF for my cousin's wedding. This was the boy's 1st wedding and all I can say it might be their last for a while. Amber and Jake are baseball fans and got married in the outfield of a baseball field. The weather was perfect and it was a beautiful outdoor wedding. Now as far as the boys go it's a different story. Chase decided after 10 mins of sitting in a chair waiting for a wedding to start was long enough. He proceeded to run the bases on the field during the whole service. His khaki pants were a dark tan from the dirt and he was drenched due to sweat from all the running in the sun he had done. So we had to make an outfit change before the reception.
At the reception the boys wanted no part of eating or sitting still. After being there for 20 mins we had to leave. As Brayden spit up milk all over me and I had to go home and change. (2nd outfit change) Also Chase kept grabbing cupcakes from the reception line. (Oh you can't take these kids anywhere!)I decided to have my sister text me when the reception was done and the dance had started. We made our final attempt to stay at the dance. The boys did much better. Brayden feel asleep about an hour into it. Chase took a while to warm up but soon he was on the dance floor mostly doing his WII moves. But Cousin Bridger and he showed everyone their boxing moves also. I think they may have had some people thinking the two of them were really fighting but playing was more the case. 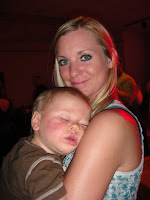 Here are some pictures from the wedding/dance. Along with a video of Chase's hip dance moves. I'm going to say he gets that from Eric.
I'm only sorry I didn't get a picture of the bride and groom.  To busy with the kids. 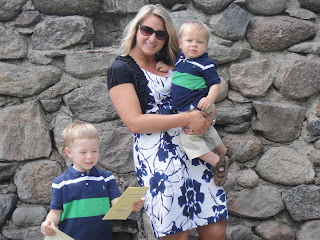 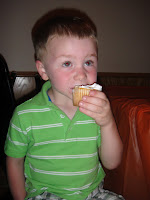 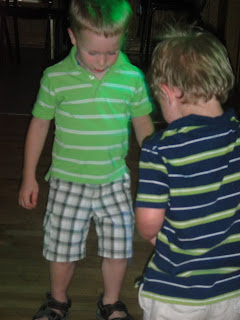