Back in December I got discounted tickets for Disney on Ice.  I thought it would be a great thing for just Chase and I to do with out his busy little brother.  At first he didn't want to go because he said he had a tummy ache.  Than when we got there the place was full of little girls dressed up in their princess costumes.  I was a little worried he won't like the show if it was just "girly" ice skaters.  But I'm happy to report I turned out wrong.  Though a lot of it was "girly" there was plenty of other action.  From Peter Pan to Captain Hook to Lion King and Aladdian.  With a big bag of popcorn and large sprite Chase sat in his seat and enjoyed the show.  They put on a great show with lots of great costumes and of course good skating.  I highly recommend for any Disney fan.
I only got a couple camera shots for I dropped my cell phone and it started not to work. 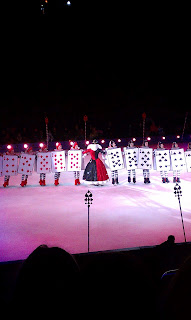 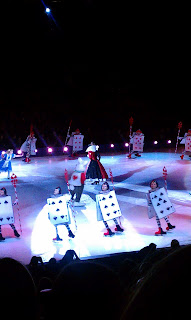 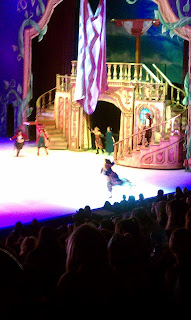 After the show we took in the sights around Rice Park in St. Paul.  With all the Christmas lights and the ice skate rink it was a really neat thing to see. We even found the Charlie Brown bronze statues around the park to take some pictures by.
﻿ ﻿
﻿ ﻿