It's been a while since I posted what the boys are up too.  Chase will be turning 4 in April (I can't believe it). The birthday party planning is in the earlier planning stages.  He likes to bowl so there is talks of taking the party outside our home this year.

Chase has been keeping busy this winter with playing sports indoors.  He has 2 basketball hoops in the living room that when he watches the games also decides it's game time for himself.  He doesn't watch a ton of the game but goes back and forth between the hoops shooting the ball.  If it's not basketball he still likes baseball and we allow a soft bat and ball to be used in the living room.  He also loves his boxing gloves, football, and he did get a hockey net and sticks for Christmas but hasn't played with that as much.
We already have him signed up for tee-ball this spring and can't wait for him to get out there and play.  He also has been in swimming since last fall.  He is showing so much improvement from this time last year.

When he's not playing a sport he's playing the WII or Xbox or Ipad or watching his new favorite show "The Octonuts."  He is getting more into board games too so I always enjoy when I suggest a game and he says yes.

He is a total daddy's boy and loves to hang out with Eric and on Eric.  He climbs all over him like Eric's a jungle gym.  I can also talk him into doing some stuff with me.  We have been doing a craft project every weekend.  He's into it for about 10 mins than runs off.  So I have to find projects that don't take long or I find myself doing most of the crafting.  Another thing he enjoys doing is baking.  He loves to mix the muffins or cookie mix up and of course always wants to lick the bowl when done.

Chase is also attending preschool twice a week for a couple hours.  He seems to enjoy going there and playing with the other kids, reading new books, painting us pictures, and of course the daily treat.  We will be going to conferences in a couple weeks to see how he is doing.  Eric and I have already checked out a school for him and have high hopes he can get into a Spanish charter school in Minnetonka.  Next year he will be in YBK (year before kindergarten) class and that will be 3 days a week half days.

He comes up with the funniest things to say and still loves us to read books to him at nap and night time and snuggle with him.  I will for sure miss the day when he doesn't want us to help him to bed at night.
Just a couple pictures of Chase doing his thing. 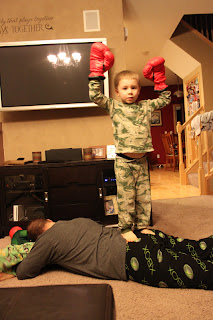 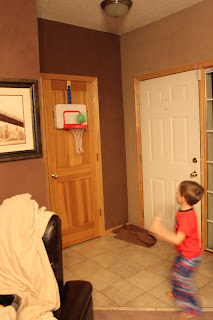 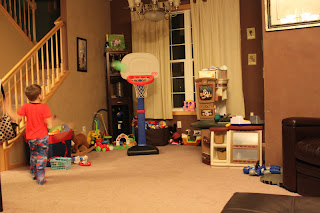