Brayden Brayden so much to say about this little busy man.  Let me just start to say even though Eric calls him the devil I won't give up on him.  I'm a fan of the movie "Rosemary's Baby" and if Mia Farrow won't give up her devil baby either will I. I think he's the cutest little naughty boy I've seen.  Yes we are learning with two it's more work and you have to use different parenting techniques on each kid.

It was this time last year that Brayden starting taking his first steps and boy he has never looked back.  Some of his favorite things to do: climb in the bathroom sinks and play with the toothbrushes, play in the toilet water or any place that has water, climb on the computer desk, and play in the fridge (we now have to tie it shut or it gets left open).
But when he's not doing stuff to drive us crazy he likes to play on his learning laptop, play on the Ipad, read books, listen to his lullaby cd, push a shopping cart around, and watch Mickey Mouse.  And let us not forget copying what Chase does and also finding ways to drive Chase crazy.

Brayden has a little temper and lets you know it.  He will go out of his way when he doesn't get what he wants to throw a sippy cup or what ever he can find near by.  He makes a funny grunting noise and than within minutes is laughing.  (we think he's laughing at us because of the look of terror on our face) You know the look of "What the hell just happen."  I think he lives for those looks from us.

Everyday he's saying more and more words.  He's got the basics down but now we are getting some short sentences out of him. "I did that." Or "I see that." Of course the thing he has been saying forever when we are at a stop light he says "Turn green right now!" He is counting and sometimes he will just start counting out loud.  And the most recent is he is learning his "ABC's".  I don't know if it's the learning laptop or Ipad preschool games he plays but he is recognizing his letters and saying them correctly to me when I show him one.

Brayden has always been a pretty good eater but not the best sleeper.  He started crawling out of his crib in November and when he ended up in our room one night in the middle of the night we decided to change his bed to the toddler bed.  So at first there was a transition for this which gave us many long nights.  Than after Christmas we took away the nuk which he only got at night and for naps.  He never asked for it but it was an ugly two weeks after taking it from him cold turkey.  We were both up with him a couple times a night sometimes for a couple hours.  But the last couple weeks he is starting to be easier to put to bed and stays there for the most part.  Many times we find him sleeping in the rocking chair with his baby and cd player.  So sweet.

With his full set of hair and cute little voice and his little attitude this baby will be a great joy over the summer. Watch out other toddlers at the park the dare devil with no fear Brayden will be on the loose!!

Here were some cute shots I took of him in the bathtub playing with his letters. 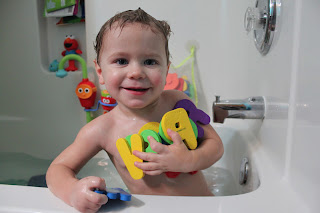 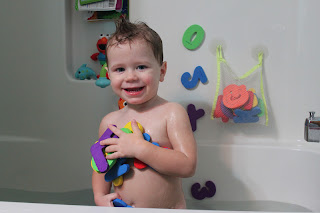 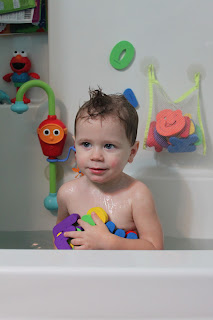