So many of you have heard that Chase has a hamster named Ricky Rubio thanks to his on air interview at the T-wolves game.  This pet was all uncle Russ's idea and he lives with uncle Russ in his bedroom.  I had hamsters growing up and look back at it now as big mistakes!! But Chase is to help take care of him and help clean the cage and make sure he gets his exercise.  And Chase does a good job of taking care of him. He enjoys the weekly cage cleanings (too young to not like it I guess) and he enjoys feeding him fruit as a snack.  There has been a couple issues he got out one weekend. We figure Brayden left the cage open the night before and he escaped during the night.  Russ spend all afternoon searching for him.  He found him under the steps which is a storage space. He pulled out the last tote and there he was huddle against the wall stuck but safe.  Than the other weekend Chase was trying to pet him and he took a bite out of Chase's finger nail.  Chase didn't make a sound but once it started bleeding he started crying. It bleed pretty good too.  He told us he didn't want Ricky anymore and to get rid of him.  But of course after a week he likes him again.  (oh darn!)

Here are some pictures of Ricky in his exercise ball.  It's kind of hard to seem him but he is a teddy bear hamster I believe and has almost doubled in size since he got him.  The last picture is a shot of Ricky's home. 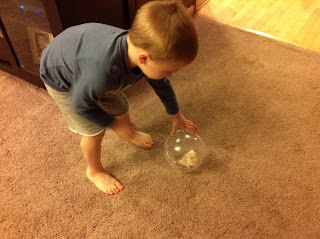 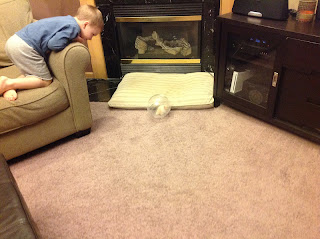 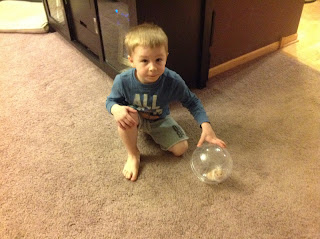 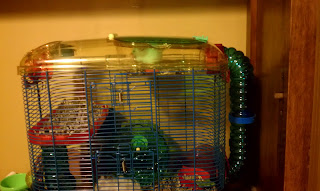 If you haven't seen his now famous video click on the link below.  It's pretty cute and still gets a lot of hits on You Tube.