Chase was so excited to decorate eggs this year.  Which I have to admit I've been waiting for him to be because I used to love to do it as well.  I had a kit left over from last year I found in our Easter decorations so for the last month he has been asking me every day when we could do it. I picked a cold Saturday and we got to work.  I was trying to talk him into drawing on the eggs with a crayon to make a design on the egg. But he just wanted to put them in the dye and leave them until they were ready. 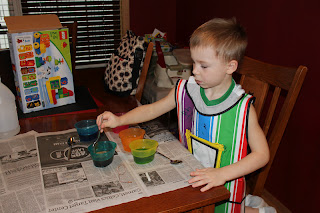 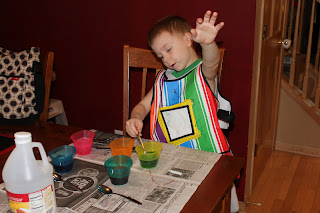 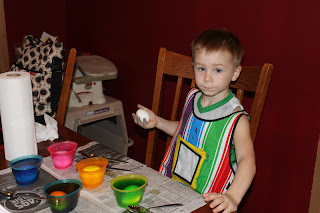 This was Brayden's way of decorating eggs.  He played on the Ipad.  He didn't want any part of it which I'm o.k. with because I'm sure we all would have been covered in dye. 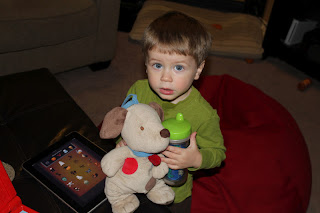 The finished products!! Of course I didn't read the decorations all the way through and messed up my eggs (the pink dyed ones). I guess you aren't suppose to put vinegar with the pink one.  So the eggs we put in the pink just came out with pink slime on them. I tired to fix it by adding food coloring in it and we ended up with a reddish egg.  Oh well it was fun trying different things. 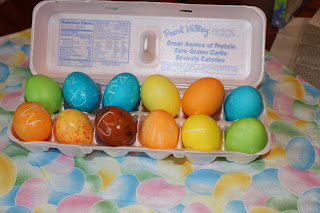 Chase left a picture for the Easter bunny and the eggs.  It was the one I had colored because he said he doesn't do a good job at coloring in the lines.  The Easter bunny in turned left them each a basket and took all the eggs.  He didn't take the picture but left Chase and Brayden a "Thank you note" on it.  Chase got a book of Bugs because he's so into bugs right now.  Brayden got letter fridge magnets because he's so into letters right now.  And also pottery barn sport sheets for their new bedding.  Who knew the Easter Bunny shopped at Pottery Barn. 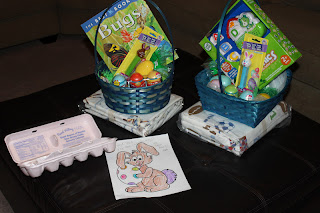 We were hosting Easter for the family so we decided to have the egg hunt in the living room so I could do it quickly. Plus Brayden probably would have ran away anyways had we had it outside.  Chase did most of the egg finding.  Brayden found a couple that were in plain sight and he was good. 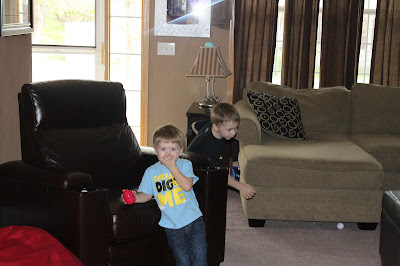 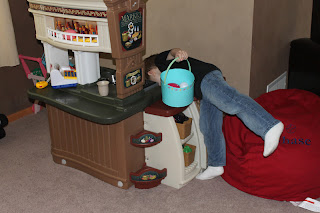 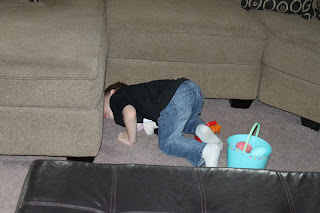