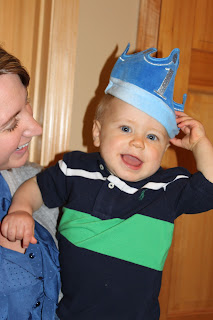 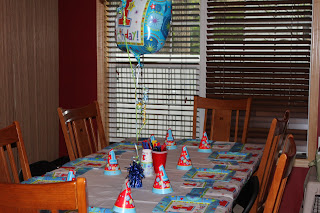 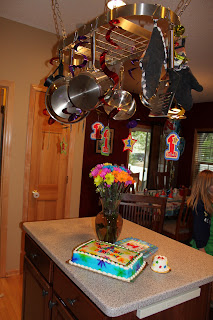 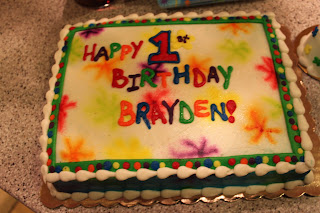 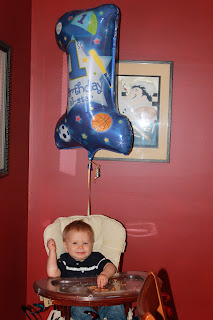 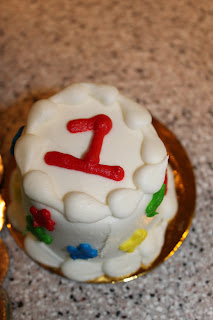 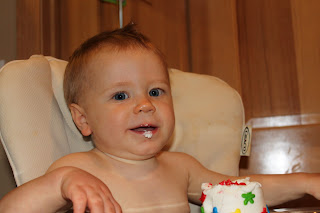 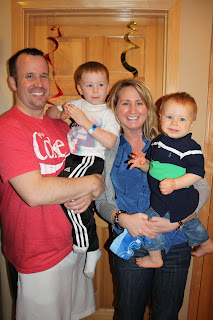 I decided to do Bray's party on the actual day of his birthday.  Friday the 13th!!  No scary theme this year maybe when he's older. Since at one they don't remember a ton figured I could get by with a simple party.  The theme was #1!!  We once again got a cake from the Queen of Cake lady.  Once again it was great. I went with a marble cake with cookies n cream filling. The other food on the menu was from our new favorite pizza place that opened up down the road from us Pizza Luce!!  My parents made the trip from TRF along with my sister and nephew Bridger.  Than of course Grandma Char, SLP Bjorgaard's, and the Rislov's made it for the party.
Brayden enjoyed his pizza and smiled when everyone sang happy birthday to him (Chase had cried).  He didn't know what to think of the cake.  He pretty much just moved the frosting around. He did taste some but wasn't crazy about it.  I cut a little cake up for him and he went back to playing in the frosting.  He didn't get to open one gift.  His brother, cousin, and Addy made sure of that.  This year I let it slide.  He wasn't very interested in opening them anyway.  That would mean he would have to sit still for more than a minute.  These days not something he likes to do.  He got great gifts and Thank you to all that came and got the little guy something.  I know it's hard to come up with something for the 2nd boy in a household but everyone did well.  It's always nice to get new clothes rather than Chase's old stuff. He loves any toy that makes noise and lights up. He now has a bunch to call his own.  Though Chase doesn't see it that way.  I'm sure I never took my little sisters new stuff? And Eric being the 4th kid I'm not sure he ever got new stuff. Except we all know he got some Voltron toy that he still calls "the best birthday gift ever".
Posted by Jenny & Eric Bjorgaard at 10:13 PM