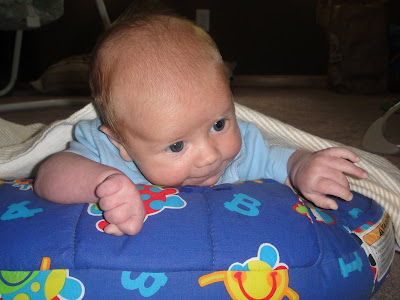 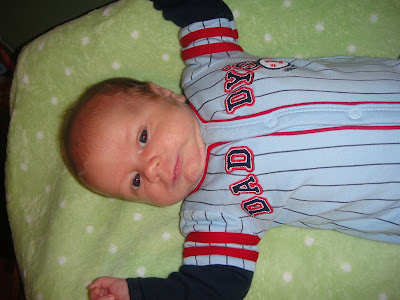 Well everyone is right the second child sure doesn't get as many pictures taken as the first kid. I know by this time with Chase I had taken over 200 pics. Brayden has about 50 pics (not including Grandma Char's photo shoot). Though he really isn't doing all that much new. He is busy smiling lots when you talk "baby talk" to him. Plus he's make lots of noises now like he's trying to say "Hi" back to you. He's also staying awake more and for longer periods. He loves to be outside and look around. Also loves to be carried around too during fussy periods. Can't put him down or he screams. (always great when this happens around Chase's bed time). He always is full of smiles when he's on the changing table and is starting to warm up to baths. He does a lot of kicking around and splashing me.
He'll be 2 months next week. Time is sure flying by. He has his 2 month appointment next week so I'll know his status than. But he's getting so big so fast!!
Here is a couple pictures I did take of him.
Posted by Jenny & Eric Bjorgaard at 5:10 PM