Eric got 4 tickets to the Twins game last Friday. We figured we would take Chase and see if he liked the game this year. His first outing was when he was 5 mths and cried when the crowd cheered. Pretty funny because you couldn't even hear him over the crowd. The second time we took him was last year for his 1st birthday. He was scared and Eric had to take him home early. My family was in town for his big 1st birthday so we had all went. The Twins were down when Eric left and they ended up hitting a grand slam and came back to win. Great game sorry Eric had to miss it.

So we figured 3 times is a charm. We got the SLP Bjorgaard's to watch Brayden and headed to Target Field. At first he was a little nervous with all the people and the cheering. I took him up to get some food and all of a sudden I turned around and he was standing there clapping and saying "Go Twins". So he liked it!!! The rest of the game he ate many different ball park food, put his sippy cup in the cup holders about 100 times, and every time the crowd clapped he did too. Pretty darn cute!!

All in all a great night at the ball park and the Twins won too. We are happy to know we can take him back now. Now we have to train in Brayden. 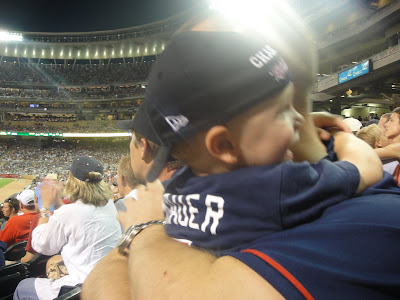 Not the best pic but a cute shot of a happy dad and son at the game. 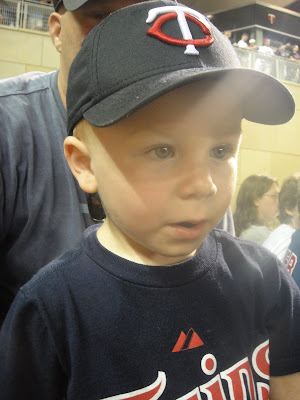 Not sure what this look is all about. 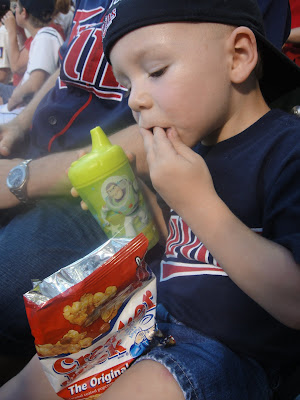 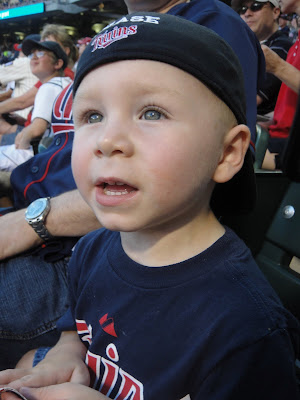 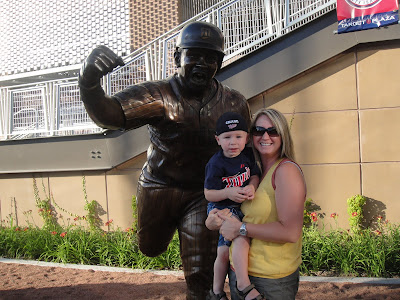 Kirby, Chase and I